8.6 Metabolic Acidosis due to Drugs and Toxins

Ethylene glycol is a colorless sweet tasting solvent which is used in antifreeze solutions. It is nontoxic itself but is converted to toxic metabolites in the liver:

If untreated, ingestion of only 30 to 60 mls may be sufficient to cause permanent organ damage or death. The osmolar gap may be raised (to > 10) early in the course but this is variable. 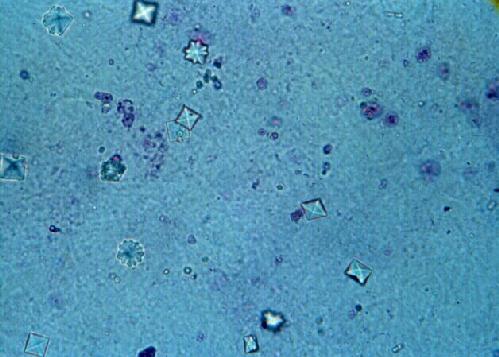 Fig: Calcium dihydrate crystals in urine - the ones with the 'folded envelope' appearance

Toxicity is usually considered as occurring in 3 stages: intoxication, cardiorespiratory changes and renal toxicity (see below)

Previous | Index | Top of page | Next